Well we've gotten past the first two weeks of "introductory kindergarten" and are now in full blown edumacation mode.  We're using  My Father's World curriculum, which I chose after falling completely and totally in love with the "unit study" style of teaching. Basically, this means that every subject we study is integrated with every other subject.  So our first week unit is on the Sun. We're teaching about the orbiting of planets, and about shadows, and how the sun makes things grow. We're reading My Shadow by Robert Louis Stevenson. We're learning about the letter S, how to write it, words that start with that sound, etc, we painted a picture of the sun, and we're learning about how Jesus is the light of the world. We're also learning about how the sun turns grapes (and, as it were, the female populations of both Florida and California) into shriveled up, wrinkly little raisins.
Our experimental pre-raisins are sitting on the BBQ outside. 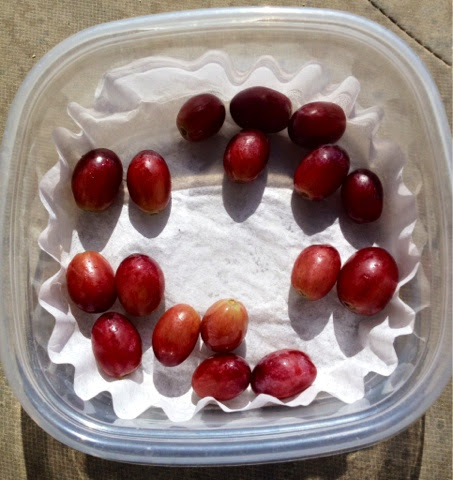 We were explicitly instructed not to EAT our raisins, once they do in fact become raisins, as they are not being "raisined" in sanitary conditions.  Which feels confusing, considering how commercial grade raisins are picked, then thrown onto a dirty tarp in the walking spaces between grapevines, in the great outdoors where there are all sorts of bugs and dirt and feet. But sure, my backyard, or the "plate next to a sunny window" as was recommended by our material, THAT's unsanitary.
Fine. 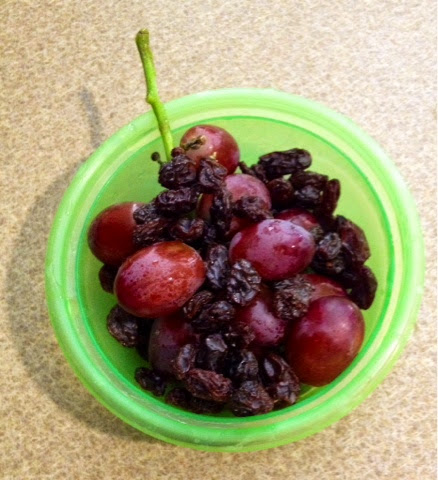 To celebrate the sun, we had a sort of life and death, or... I dunno, death and later death? themed snack. (All food items were sanitarily purchased from a grocery store, I assure you.) It was a hit. My kids are ravenous fruit bats.
One thing we're adding to the curriculum, one thing I am passionately enamored with for little-schoolers, is our daily journal. I did it when I was in kindergarten, and I really can't think of an awesomer way to catalogue our years of schooling.  Worksheets will most assuredly collect in the recycling bin, but the journals will be cherished forever.
So the pattern has been this: kid tells me what she wants to write about, usually in answer to a question I've asked, I write it in highlighter, she traces it and draws a picture.  More recently, I've been leaving some blanks, letting her fill in words I know she can sound out. Like so: 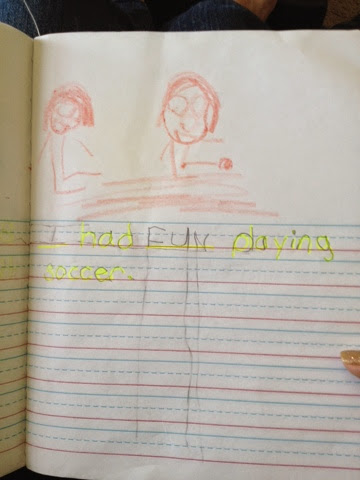 Some of the crazy extra lines here is because we had a sudden "I hate Mommy" moment, and the extra lines were my punishment. So that was nice. Later we were friends so she erased it.
Today though, my dear, (far less cantankerous) little princess decided she wanted to write her whole journal entry on her own. So this: I instructed her wi the following:
1) Twice I reminded her that words need spaces between them, hence the sort-of-but-not-really erased red pencil stuff at the beginning.
2) For the word THAT, I let her know that she needed to use t and h, which was new information.
3) I told her that "The" ended in "e". It's a confusing sound, if you think about it, and so sounding it out became an exercise in cautiously listing vowels. She remembered about the "th" stuff from the prior word, and made that connection on her own.
4) I asked her the question, "what goes at the end of a sentence?".
And that's it. The rest is her doing. It may not be impressive, I have approximately zip-diggity idea what other kindergartners are learning these days, so I can't say if she's a genius or a ... let's be kind, non-genius, but I can tell you this: THIS is why we homeschool. Yes, it's busy and complicated with 2 other kids running around, and yes, my house is far messier than God intended for it to be, and yes, if I went back to work full time, we'd be making much more dinero, but seriously, WE ARE HAVING SO MUCH FUN. I wouldn't trade these moments, this opportunity to watch my daughter learn how to write down her own thoughts, to paint for the first time, to decide what she wants to be when she grows up (a baker, if you're curious), it's just, it's amazing. And I'm sorry that I'm getting a titch sentimental here, but I wouldn't trade that for all the clean homes, the money, and the quiet cups of coffee in the world.
Posted by ~Ashley~ at August 27, 2014
Email ThisBlogThis!Share to TwitterShare to FacebookShare to Pinterest