Are homeschoolers still Weirdos? Story at 11. 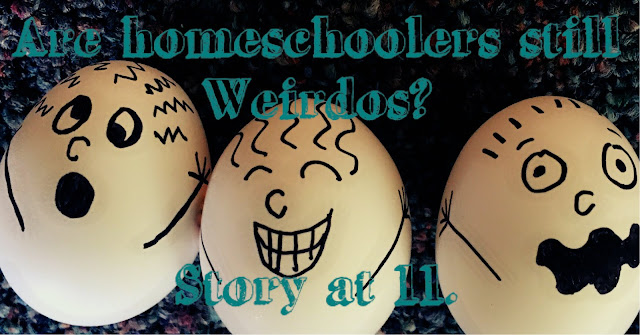 "How many of you Homeschoolers can acknowledge that you're Weirdos?"

I heard this question posed recently. The lead up was that, years ago, all homeschoolers dressed weird, acted weird, and were, stated simply enough, a big group of Weirdos. But the problem the Asker had was that, all these years later, no matter what we say about it, the weirdo-ness seems to persist. Homeschoolers are not normal. Homeschoolers are still creepy Weirdos.

For those of you that don't fit in my particular demographic, there's something you need to know here. We homeschoolers love, love to talk about how cool we've gotten. We dress better. We act better. And we like to sit around and discuss exactly how much homeschooling has changed over the years. "Well you see, back in the day, homeschooling was strange. Once upon a time, only Weirdos would homeschool. But now, it's gone totally mainstream! I mean, look at us! We're not weirdos."

"For serious, believe me, we're not weirdos."

And sometimes I look around and think, um.... yeah. You definitely are. The weirdest weirdy Weirdos I've ever seen. You Weirdos.

And that got me thinking. Holy buckets. Maybe I'm a weirdo too.
Technically speaking, the definition of Weirdo is: Someone that I personally find to be socially unacceptable, outside of the norm, and generally different and strange. And unpleasant. And gross.

Anyway, the point is, we typically decide someone is weird when they don't look "normal" to us. And the problem with that is, I literally always look normal to myself. In fact, I am, by definition, my entire standard of normal.

But then I thought about it some more.

I was a chubby and awkward young child. I was best known at my school for always having my nose stuck in a book**. I was good at school and bad at sports. In short, I was a dork. A friendless, chubby, obsessive, rule-following little dork.
And the dork found a boy who was also considered a little odd. And they got married and then made some follow-up humans. And then they decided to avoid letting the follow-up humans go into the child-rearing factory that is the, ehem, "SCHOOL SYSTEM", so they got to spend more time with their weirdo parents and less time learning how to dress and act and be like all the other kids their age.

Fun story? That is not a great way to make normal people. And we didn't make normal people. We made this:
And I think... I don't know what I think. My kids aren't going to be normal. That much is true. They are different. They are different from me. They are different from each other. And staying in our dorky homeschool bubble means they'll probably keep being different.
So in the end? Crap yes we're a bunch of Weirdos. We're different people who have made a different choice. The fact that we've kept our children out of school means that they will grow up to reflect their own personalities... and the eccentricities of their own terrifying families, instead of working so hard to emulate their super cool peers.

So you do you, my crazy bunch of Weirdos. Dress stupid. Learn Wisdom. Follow Jesus. And you know what? Be funnier than the pretty kids. Because guys? That's how you're gonna rock this world.

*Don't check Webster's.
**Which on more than 1 occasion, caused me to accidentally walk into the wrong classroom. Or bathroom. HINT: If you want friends in elementary and junior high school, don't become so engrossed in books that you walk into the wrong bathroom. Just don't. In fact to be safe, don't even learn to read. Reading is for Weirdos.


Posted by ~Ashley~ at April 12, 2017
Email ThisBlogThis!Share to TwitterShare to FacebookShare to Pinterest