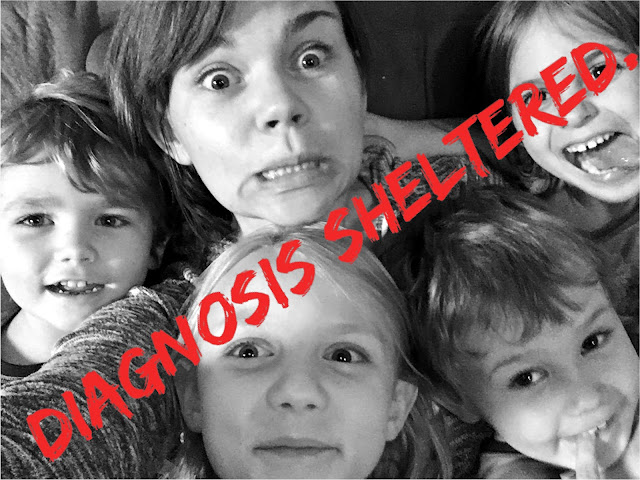 Last Friday, I found myself back at the local clinic wherein my children visit their doctor. Back. For the 2nd time in 2 weeks. Because the first time, my 3 year old had a rash which was apparently Scarlet Fever, except there wasn’t fever, there was only weird rash and minor cold symptoms. So maybe he had Scarlet Minor Cold Symptoms instead. Also? No Strep. Apparently there’s supposed to be strep. There was no Strep.

So we went to the doctor the first time and doctor’s prescription was ‘shrug, seems he’s gonna survive this one’, and we went home and the rash went away and we all went on with our lives. For like, 3 days. At which point a fever DID show up. A nasty, high fever that yes DID go away with Tylenol, but also CAME BACK CONSTANTLY AND I HAVEN’T SLEPT STRAIGHT THROUGH THE NIGHT IN WEEKS. Ehem. Sorry. I am now surviving solely on Coffee and Internal Fortitude which May or May Not be Just Gas. Good luck, Coffee.

Right, so he got a fever, and the cowbell did not help at all, so after 3 days, we headed back to the doc. Well, we headed to new doc, because regular doc was not willing or able to see us. And new doc, well, he had some thoughts. And those thoughts made me pause and reflect on my whole existence.

First off, the very friendly doctor, please hear me when I say I am not criticizing the doctor, geez. He comes in, and shows my 3-year-old his stethoscope. Which has some stickers on it, to make small children feel confused. He asks Harper what one of the pictures was. Harper responded enthusiastically that it is BATMAN! THAT IS BATMAN! Then the doc points to a picture of a beloved yellow cartoon dog, friend of an even more beloved cartoon mouse, and asks who that is. Harper… thought about it. For a while. Then reported that he did not know.

“Wow, he knows Batman, but he doesn’t know Pluto. What does THAT say?”

Answer? It says he’s the fourth kid. It says he is almost completely unexposed to appropriate, toddler or preschooler oriented programming. He knows every superhero ever. He knows Star Wars. He knows… I dunno. That’s probably about it. He knows Cat Videos From the Internet. Does that help, Mister Doctor?

So Mister Doctor then informed me that, whatever kind of sick Harper may have been before, he was now the kind of sick that is called Bronchitis. And he asked which antibiotics had worked well with my son before.

I guess, I don’t know? In fact there’s a fair chance, a pretty good chance, that Harper has never taken an antibiotic, which I told the doctor, and he fell off his chair, shocked.

I dunno…. Maybe? A super long time ago? Apparently good parents are supposed to know things like whether or not their kids have taken antibiotics, and then know what KIND of antibiotic they've had, and how exactly they responded to each and I’m thinking…. Wow. I guess I’m really more one of those, “Wait and see and you’ll probably be fine” type of parents. Or whatever you might call a lazy parent that sounds a little better than “lazy parent”.

So the doctor suggested Amoxicillin, then tried to convince Harper it would be a great choice, because it tastes like bubblegum, and “Don’t you like bubblegum?”

Um… here we are again. Because no, my 3 year old has never tried bubblegum.

But now, thanks to the doctor last Friday, I’ve learned that there’s like, a crap ton of other things I’ve sheltered my kids from as well, without even knowing about it. So this summer, I’ve decided to remedy it. We’re chewing antibiotic laced bubblegum all summer long, while watching nothing besides Disney Junior and PBS. Because it seems it’s time to get these kids NORMALIZED, dang it. 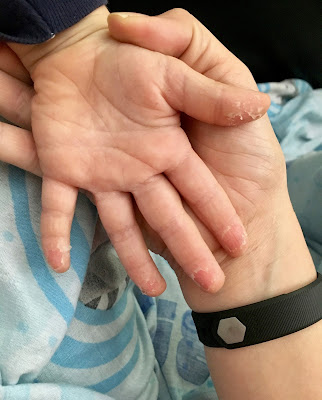 Oh, and on the illness front, Harper’s fever finally receded after 2 ½ days on those magical antibiotics. And he’s better now. Except for a cough…. And the fact that the skin on all his fingertips is peeling off. No idea what the crap that’s about.

Our focus has swiftly moved to his older brother, though, who got a fever the same day his brother’s faded, and threw up all over the living room floor at 3:30 this morning.

Seriously, guys. What is happening here? Is this the end? Are we all dying? Was our house constructed on some kind of Tule Indian burial ground, and they decided to lie in wait for the first 8 years but have now come to seek their revenge? Because DUDE. This is starting to creep me out.
Posted by ~Ashley~ at May 16, 2017
Email ThisBlogThis!Share to TwitterShare to FacebookShare to Pinterest