How to be a total disaster and maybe just a little proud of that fact.

So guys. I don’t know if you realized, but seriously? It’s almost time for Homeschool.

Truth, this is a very emotional time of year for me. I am anxious to start the next year. I’m not sure I’m going to be good at it. I am anxious about my changed work schedule. I am nervous once again that it will all be too much and I will be too overwhelmed and then I will... I don't know. Start on fire and die, probably. It is stupid. It is also Me in July.

I’ve sat down, run the dates, and calculated out what I’m hoping for our school year to look like, and based on that, I have us a start date. August 15. 3 weeks from today. Holy buckets, Batman. This is actually happening.

I've learned that it is hard sometimes to find my own excitement and motivation. This weekend, I think I found out why:

It’s because I lost them both in this giant pile of postponed responsibility. 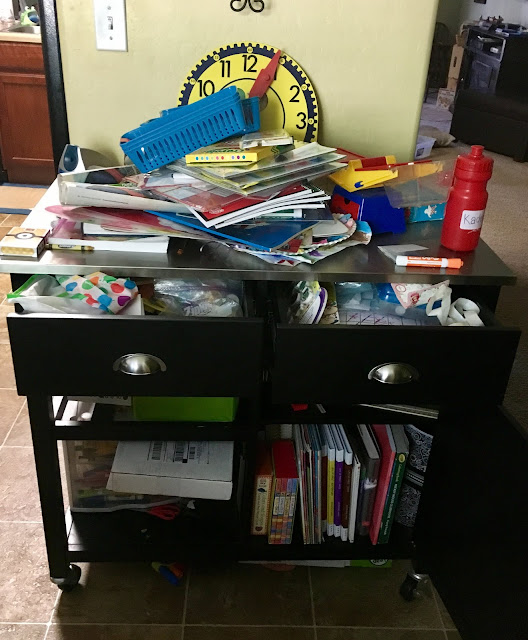 Part of me is embarrassed even to show this. Because it is gross and embarassing, I think. And a part of my husband gently suggested that maybe I could reorganize this pile of crazy a bit before his friend dropped in for a short visit this morning. Which was fair, because that stuff is BANANAS.

But there was this other part of me that kind of… doesn’t hate it. Okay, that’s a total lie. The horrible pile of psychosis-on-a-cart sits right next to our kitchen table, and it’s the first thing you see when walking in through the door. But even while I hated it every day, multiple times a day, it also represented something that was a little bit awesome. I walked by and it said, “Hey Sweet Mama* ,  I am absolutely not your problem right now. You are on vacation. You can walk right past me from early May until late July and just like, chiiiiiiiiill. So dump those books right here. Scatter those dry erase markers wherever you see fit. Let me get all dusty, and ignore those pencil shavings. You just kick those feet up, you beautiful piece of not-a-teacher-today. Yes, they're still your monkeys, but this is so not your circus."

Of course, there are some homeschool parents out there who don't let their furniture talk to them like that, even if the furniture was first intended to serve booze. Along the same lines, there are homeschool families that start later than we do. Or earlier. Or basically “do school every day”. Or basically “don’t do school any day because it’s called real life, and wake up Sheeple.”

SIDE NOTE: Obviously, I really still don’t understand the whole “unschooling” movement. Right this very moment, one of my daughters is watching videos of other people playing Minecraft, another is wearing a necklace for a belt and swinging the end around like an old timey cop’s billy club. My older son is hitting everything he can see with a pretend invisible light saber, and our youngest is walking around with a yo-yo dragging from his butt. He says he’s a puppy. So…. is this it? Is this unschooling? I mean, it’s not school, so… yes then? Because I honestly fear for their future. 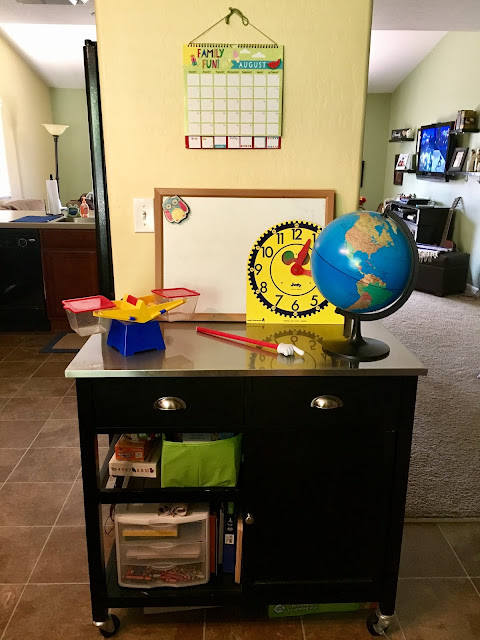 *It’s not my fault. That’s what our homeschool calls me. It likes to get fresh sometimes. Maybe it’s because it was technically created to be a wine cart. I dunno.

Posted by ~Ashley~ at July 25, 2017
Email ThisBlogThis!Share to TwitterShare to FacebookShare to Pinterest