Sorry, Kid, you're just not that special

I'm not sure if you heard, but last weekend my 3-year-old puked all over my minivan as well as my emotions, and it's been a hard journey getting back from that. Praise the good Lord above though, somehow miraculously our minivan does NOT smell like a twice-baked vomitorium, which is 100% what I was anticipating, seeing as the throw up was everywhere and on everything and it's been, oh, right around 105 degrees all week long. Now I'm not terribly good at math, but that feels like some really unfortunate math. 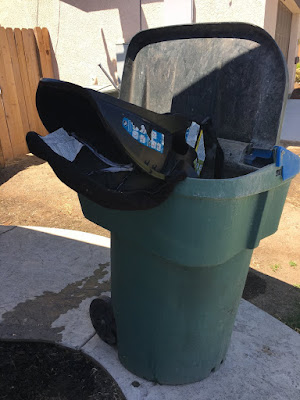 So the car is cleaned which is GREAT because our Duct-Tape Mobile is in the shop now, and so we are all out of options. Yesterday, the trash collector came by to deal with this little issue, and we are learning to move on with our lives. I mean, I'm not going to say "it's like it never happened", because obviously that's a lie. Things will never go back to the way they were before, but we are learning. We are learning to exist in our new Post-Vomit reality, and I'm starting to believe that one day, one day we'll be okay. 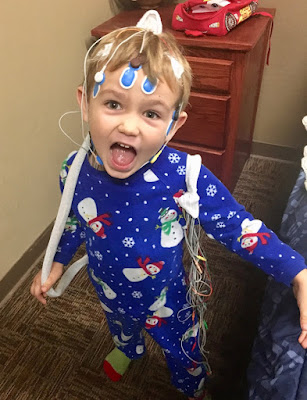 My 5-year-old is okay now. No sorry, he is not okay. He is ecstatic. Now keep in mind, that this is the child who's personal favorite memory was the time he was wired up to a hundred little sensors for a sleep study. So YES, he is an easy going and generally happy little person, so I shouldn't have been so terribly surprised by this.

Later in the day after Vomit, I ran to the store to pick up a few groceries, a pregnancy test, and a new booster seat for my 5-year-old. Seeing as how I was throwing out the younger child's seat (and trust me, no single moment in my entire life was ever more deeply satisfying than throwing that Up Chuck Throne straight into the garbage), we needed to do a little... reorganizing. So I made a very quick and very executive decision that our 5-year, 42-pound kid was ready for his first booster seat, and our car's last remaining 5-point harness would go to the baby man.

I got back from the store, and almost thoughtlessly, handed Kaden his new booster seat. But "just handing it over" was not sufficient for him. His eyes gleamed. His smile stretched to the back of his head. "YOU MEAN I GET TO HAVE A BIG KID SEAT NOW??" He was over the moon.

In the evening, he sat me down for a chat.
"Mommy, why did you decide to get me a new booster seat? Is it because I'm a big boy now? Is that why you thought I should have a big kid seat like the girls?"

I had to pause. I mean, this kid had been through the same ordeal as the rest of us. He spent the 15 minute drive home telling me that now his tummy was hurting and he might throw up too. He also knew I threw away his little brother's vomit covered chair. So he knew this wasn't actually all about him.... right?

The answer is that, no. He wasn't aware. Because he is 5 and he is a human and all the humans can only see the world through their own narcissistic lenses. To Harper, this day was about his illness and getting over his immense discomfort. To me, it was about being forced to put aside the plans I'd had for the day to care for my children and deep clean our vehicle. But to Kaden, it was his own coming of age story. It was him taking a step from boyhood into becoming a man. He was so excited. He was so incredibly proud.

It made me think though. We all have our own stories, and we are always either villain or victim, hero or, at the very least, MacGuffin. But we are never never the extras. We don't see ourselves as the ones just standing by, being affected by plot points so much bigger than ourselves. When a man walked down a street in New York, dreading arriving at a job he hated, and narrowly missed being smooshed by a building the Green Goblin had just knocked over, he wasn't thinking about Meta-Narrative. He probably assumed that was a supernatural sign that he should finally move back to Wisconsin, look up his old high school sweetheart and finally settle down. In his mind, the movie isn't called Spiderman. It's called John Doe Almost Dies Then Moves Home to Wisconsin. I mean, it's a terrible movie, but to John, it's the greatest story ever told. 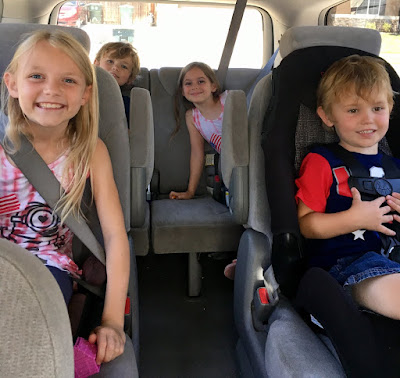 So what do you do with that? Do I shoot this kid down with a cold dose of reality? "No, sweet child, this really had nothing to do with you at all! You were just the person sitting next to the vomit. You were vomit-adjacent. And as it turns out, I needed to pass on your carseat to your little brother. Basically, you're collateral damage." Obviously that's not what I do, because that seems insanely harsh. So instead, I tried to roll with it. We talked about what it meant to be in a booster seat. About the responsibility he now had for his own safety, how it meant I had to be able to trust him to stay seated during car trips. We discussed his new-found responsibilities, and his new-found freedoms. The point is, no. This story wasn't really about him. But at the same time, it is about him. It's part of his life, and it means something to him. In fact, it's now part of how he defines himself.

The moral of the story: Sometimes, it doesn't have to matter what the story "means". Every now and again, the world is what you make of it. So tell the story that helps you grow. The story that makes you better. Because John Doe Almost Dies Then Moves Home to Wisconsin may be boring as anything, but I guarantee no one's life changed cuz of Spiderman.

Posted by ~Ashley~ at July 08, 2017
Email ThisBlogThis!Share to TwitterShare to FacebookShare to Pinterest