How to be socialized. Or something.

As I have been writing about all things homeschool lately, I am sure that you have been waiting, with baited breath of course, for me to bring up the subject of socialization. 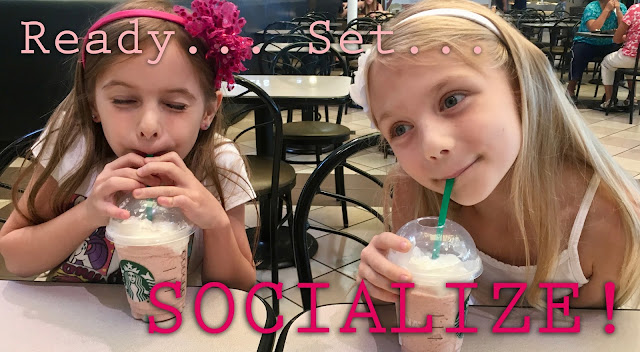 Socialization. That 27 letter word* that makes every homeschooler shake in their boots. Or fuzzy pink slippers as many homeschoolers prefer pajamas and they are not wrong for doing so. The socialization question is the single most frequent thing asked of any homeschooler. In fact, when you start on a homeschooling journey, you will learn that suddenly, nobody wants to talk about the weather anymore. Nobody asks about your weekend plans. Nobody wants to chat about the last episode of the Bachelor (which is of course fine because you aren’t allowed to WATCH the Bachelor if you teach your children at home**). What people WANT is to ask you how you intend to socialize your kids. They don’t just want to know. They need to know. Because if they do not know, they will all definitely die. And it will be your fault. Because seriously. How. Do you socialize. These kids.

Now for me, the socialization question is awkward for multiple reasons. Here are just some of them:
So that's the issue. We can start there. And truth? Maybe my kids will be weird. I mean, you become what you surround yourself with, right? And for good or for ill, my kids are spending a lot more time with their parents. And as it turns out, their parents are…. well, a little bit weird. My children have a cross to bear, and it is called Weird Parents. Of course they don't know it yet. Which I think is cute. Give 'em a minute.

So yes, maybe our kids will spend too much time with us and that will make them incurably weird. Or maybe they will learn how to wait appropriately because mommy is always busy with 3 other kids. Or they'll learn conflict resolution, because you can't just change siblings every time you have an argument, and Working It Out Or Dying is inevitable. Or maybe they'll learn to stop taking themselves so seriously, because they spend their days getting mocked and teased, not by bullies, but by people they know are only teasing out of love. And they find it's not so scary after all.

Of course, these things are great, but it doesn't mean they won't be weird. But the good news is, they'll probably each end up being their own brand of weird. At this present time, I have four children, and some days, I think the only thing they have in common is geography. Some are shy, some are outgoing. Some prefer to talk to adults while others love hanging out with kids. Some are artsy, some are sportsy. Some like the indoors while some would prefer to live in nature.

And... I don't know how I'm going to socialize all of that. They play. With each other and with other kids, they all seemed to figure out how to play. So maybe they're getting socialized. Maybe they'll be more socialized than anyone could ever have imagined. Or they'll be weird. Of course, I mean it wouldn't kill anybody if we could work out that booger picker thing...


**Obviously that’s a lie. Homeschoolers are allowed to make bad life choices, just like the rest of you.

Posted by ~Ashley~ at September 08, 2017
Email ThisBlogThis!Share to TwitterShare to FacebookShare to Pinterest