To Santa or NOT to Santa...

So as it turns out, Fall kicked my butt, even harder than Summer kicked my butt and a heck ton more than Spring kicked my butt. I love, LOVE Fall, probably because I am a middle class white woman of a certain age, but also because it’s my birthday in the fall and I look GREAT in warm colors and LESS GREAT in a swim suit, plus Football is the only sport worthy of spectatoring so there. It’s super duper more complex than you figured. That being said, I could sure go for a Pumpkin Spice Latte if anyone is offering…

Anyway, the point is that, whatever the reason, I do still really love Fall. Unfortunately it seems Fall has never felt the same way about me.

Whatever. You don’t need to know about my complicated relationships with the seasons. Besides, it’s December and Fall I AM SO TOTALLY OVER YOU ANYWAY. Psh. Now it is Winter Season and I have… a bit of an issue. I’ve been confronted by a problem today that I’ve been anticipating for years, and yet still find myself unprepared for:  My oldest child wants to know if I believe in Santa Claus.

I’m gonna pause here for a second because I know there are some people reading this who think I am a 1-terrible mother and or 2-terrible Christian because we even do the Santa thing in the first place. So for those of you who already offended then… I don’t know. Hashtag Trigger Warning, this post talks about Santa Claus. Supes sorry about it.

So back in early days, when “What should we do about the Fat Man” was just a hypothetical question, Husband and I had lots of real beliefs on the issue. We weighed the options. We considered the long-term psychological implications. And made some hard choices. Namely, we decided that YES we were a Santa Claus family. Because, namely, we thought it was fun.

But in order to Santa appropriately, we decided we needed some ground rules: 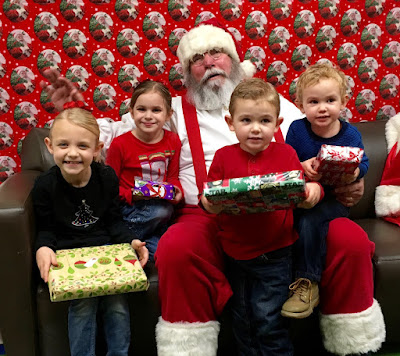 Our plan was, it’s a yes for Santa, but always with a “nudge nudge, wink wink” that lets them know it’s all kind of a game, and not something to base your worldview on. It was perfect. All the fun, no deception. We were gonna hit the sweet spot.

Well, turns out we failed.  Try again next…. Life.

I’m not sure if our nudges and winks were too subtle, or the culture too strong, or heck maybe our kids just aren’t as smart as we’d hoped, but they have NOT AT ALL clued into the Man the Myth the Legend yet. In fact, eldest child went ahead and decided she saw him last year, (first it was his boot, now it’s also the shadow outline of his face), and she seems to be settling in for a long winter’s belief in Santa.

Which brings us to today.

“Mommy, do YOU believe Santa is real?”
Okay… we knew this was coming, we just… hoped it wouldn’t be so loudly and so in front of all the other kids in the house, just in time to ruin Christmas for everybody.
“Well, what makes you ask that?”
“I just want to know!”
“What do you think about Santa?” 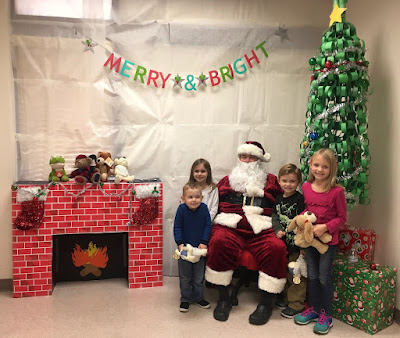 Sum up: she believes. Cuz she saw him and all that. But she has friends who don’t believe, and she’s been arguing with them, and now, she’s starting to think about it.

Now I’ll be honest, her friends thinking she is stupid is not the exact way we were hoping she would clue into our little Christmas game… but how we get there from here is a bit of question.

Should I sit down with her for a “see how it’s really true even though it’s really not true” chat? Should I do that, you’re in on it Secret Santa thing from that viral facebook post? And if I do… do I have to do it before Christmas?

The truth is, I’m looking at my kids right now and I’m thinking, you are growing up so fast. And soon, very soon, too soon, there is stuff to KNOW. There is weird stuff. Disappointing stuff. Straight up depressing stuff. And really, truly terrifying stuff. This world can be dark and scary and hurtful. There are conversations to be had. And only a blessed, beautiful, magical, few moments of childhood. And really? It seems I have no desire whatsoever to end that magic. And why should I? There will be enough time for hard days. There will be enough days filled with hard truth. And today, I find I believe in Santa. 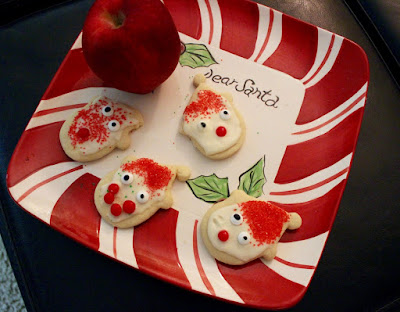 *In case we have any on here who struggle with metaphor, no, we do not EAT Santa. Except if we’re talking sugar cookies meant to look like his face. Because we definitely do that.
Posted by ~Ashley~ at December 07, 2017
Email ThisBlogThis!Share to TwitterShare to FacebookShare to Pinterest