Because sometimes, you just fail. Because of Newtonian physics, probably

I get it. I’m oversharing. I go from dead silence for 4 straight months to multiple posts in one weekend. Well, I’ve never been known for my sterling social skills, so there we are. But if I were not a weirdo, I would also probably not Raise Weirdos, and then where would we be?

So, ever stop and think, I'm probably one of those people who would be a really solid parent to like, 2 kids?

After last week's highly optimistic Hashtag Winning At Life, mixed with yesterdays bite the bullet/paid off the debt news, you might think I’d still be riding pretty high. But it turns out I am not. Because lack of sleep probably. But also because Newtonian physics dictates that for every awesome there is an equal and opposite re-awesome. And I’m living pretty hard in that re-awesome at the moment.

So Thursday night I stayed up SUPERDUPER late to bake a cake, wrap some gifts, and decorate our house for my newly minted 6-year-old’s spider birthday*. Because I’m not a regular mom, I’m a cool mom, that’s why. And right as we were putting the finishing touches on the house I look around and realize, well crap. I forgot the balloons. See, I was gonna get some balloons but I wasn’t sure about the color, and then I found some online with spider webs that were pretty cool but also kind of expensive and I’m not so sure they're worth the money after all they are just balloons and well, in the end what I decided to do was completely forget to buy any balloons. Husband rolls eyes at me and gets in bed because it is almost 1am and there is a giant spider on our wall and he just spent over an hour building a bicycle. Also, he believes balloons are not essential to life for some strange reason.

Flash very shortly forward to 5:30am, when I am awoken by 2 small male persons sneaking into the room.
“Mommy, I reawwy wuv my spider birthday!”
“Yeah…. But we were kinda sad cuz there’s no bawwoons….”

I swear? I heard about the balloons 20 times that day. They told everyone. In fact, I’m sure they’ll all have therapists one day who will have to sit through the tragic saga of the Birthday Where Mom Forgot The Balloons.

So I get my 4-hours-of-sleep-is-not-enough-hours-of-sleep butt out of bed and tried to be cheery and friendly with the presents and the pancakes and the playing with of new toys but really? I am old and tired and grumpy and they are young and tired and grumpy and I’m starting to think the “stay up late to decorate and basically guarantee the kids wake up well before the sun” plan for birthdays is no longer working for our family. But we suffer through our exhaustion just the same, until it's late enough for me to pop a movie on TV and pray to the good Lord above that someone takes a nap.** 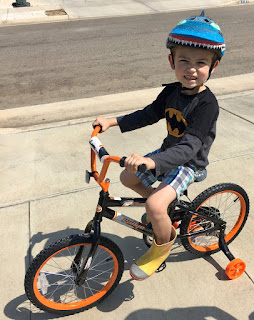 Because this day is not over yet my friends, oh no. We’ve got dinner out with family, and an end of the year celebration for our school program and then cake back at the house. However everone has kind of rallied despite a disconcerting lack of naps, and except for the fact that my kids won’t stop crawling all over the floor, dinner went off without a hitch.

Rush over to the school site because we are running late*** and the kids jump out of the van to go join their friends and classmates. Or at least, that’s what I thought. And that’s what I continue to think until Mr. Birthday Boy’s class takes the stage for their presentation, and his teacher looks back at me. "Um.... is Kaden here?"

*And also to discuss the long term ramifications of NFL Draft Day One with my husband but geez you don’t need to know every intimate detail of my life. Get a hobby why don’t ya. Perv.
**SPOILER: No one takes a nap. Mom is still a sucker-optimist.
***Be shocked. I dare you.
Posted by ~Ashley~ at April 29, 2018
Email ThisBlogThis!Share to TwitterShare to FacebookShare to Pinterest