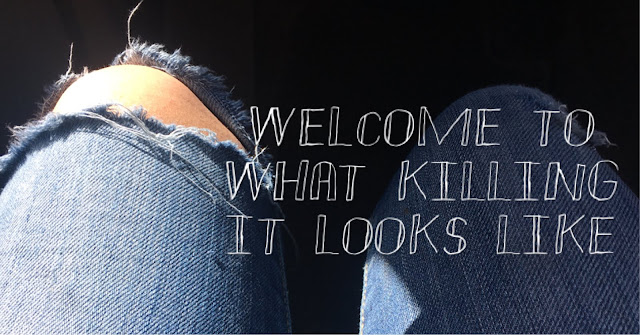 Well, I've taken multiple months off of the blog, but turns out, I had to come back. Because guys, I am KILLING IT RIGHT NOW. Okay, so YES, I ripped my pants today, and it was just about my last pants so I'm pretty concerned about the pants. Also, the underwire stabbed through the cloth and spent the day poking me in the right breastical which made a long work day feel like a looooong work day. But the bra is gone, the jeans are gone. But in the interest of the day of Killing It: I ripped my pants in the knee. I did NOT rip my pants in the butt. I cannot, canNOT express the difference in these two experiences.

So, on to the ways I'm KILLING IT RIGHT NOW. First off: KILLING IT AT PARENTING. My 8 year old just completed Classical Conversations Memory Master. And you probably don't know what that means but if you do you know that it means you know that it is INTENSE, and I personally believe that the parents of these children are amazing child-producing super-geniuses. Obviously that seems a little self serving. And I've decided I'm okay with it.

Now, last day of CC done for the year (Straight up nailed it thankyouverymuch) and on to KILLING IT AT WORK. Training a new staff with a super high energy, jump-off-the-furniture-just-to-see-how-you-respond, fabulous little boy went GREAT. Great, wherein he started the day throwing his soiled pull-up around the room like it was a set of Marti Gras beads, then biting me in the upper thigh slash lower derrière, and ended the day quietly following directions and sitting comfortably in my lap, asking me to squeeze his hands and feet. And basically, I'm sorry, but getting to be an Autism Whisperer, even if it's only for 5 minutes that one time back in 'Nam, will make you feel like a straight up superhero. And tonight, I am a straight up superhero.

So then school is done, work is done, and I'm on to grocery shopping. KILLING IT AT GROCERY SHOPPING. Which doesn't take a lot. I chose the groceries and then paid for the groceries then packed them in my bags and brought them home. But what do you want, man? It's just groceries. Chill. But then RIGHT when I pull up to the house, Eye of the Tiger shows up on my itunes shuffle and dang it all I've never unloaded groceries in a more butt-kicking fashion. In other words, KILLING IT at unloading the car. KILLING IT at stocking the fridge.

Then, THEN, I go to open the mail, and I see what looks like a check from the county. Now, as a mother of a foster-adopted child, I am familiar with the look of Checks from the County, but this is not the normal time for Checks from the County, plus also I notice the word "Auditor" in the return address and my brain goes straight Ackabar* in less than 12 parsecs. But then I thought, what the heck, you can't hurt me today, on this the day of KILLING IT, so I opened it. And ya know what? It WAS a check from the County. It was the reimbursement check for adoption costs which we submitted a scant 15 months ago. And since we'd long since given up on the idea that the County was going to keep their promise to reimburse our adoption costs (seeing as they promised to do so within 3 months and that passed by over a year ago), we basically just got a free exciting bonus check. And as we've been paying off debt like it's going out a style, I have the perfect place to put it. Namely, in the bottomless pit I dug going to college on debt in the first place. But still guys. Paying off your debt is DEFINITELY KILLING IT. So boom take that Satan.

Alright folks. I'm off to go spend a little time basking in the vast glory of this day. Killing it, y'all. KILLING. IT.

*If you don't already get that reference, then you think that reference is stupid and you definitely do not appreciate that reference. So I'm not explaining it. Move on with your life.
Posted by ~Ashley~ at April 23, 2018
Email ThisBlogThis!Share to TwitterShare to FacebookShare to Pinterest