So there is this thing about me which I find makes me difficult to relate to in my pushing-middle-aged* suburban homeschool Christian mom circles. And that is the fact that I love, LOVE me some horror films. 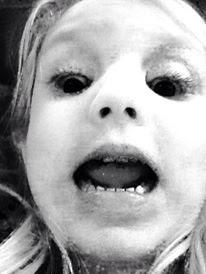 Okay, take a minute and have your feelings here, call me a terrible devil person if you find that necessary. But if you can get past that and want to open up some real conversation, I will staunchly defend horror as a genre and explain to you how
1 - fear is not sinful emotion
2- the tv show Friends is SERIOUSLY DEFINITELY a more culturally destructive product than almost any horror film,
and
3- many horror films are in fact deeply moral, and I'd even go so far as to say deeply religious, so na-na-na-boo-boo there you go.

The first horror movie I ever saw was Nightmare on Elm Street in the seventh grade. I followed that up by pretending very hard that Freddy Krueger did NOT haunt my dreams for weeks afterward, so that once I inevitably recovered, I would again be allowed to watch more horror films. The WORST movie I ever saw was probably the Langoliers, unless it was Hostel**, or Halloween: Resurrection, or maybe The Leprechaun.***

The best horror film I have ever watched.... Now that's a little bit more difficult to say, but Hitchcock deserves his credit, Psycho rocks the house, and The Exorcist is a standard bearer, and then there's some real modern horror classics, like The Ring, The Conjuring, Sinister, and the metafiction gems that are Scream and Cabin in the Woods.

Alrighty, so there it is. I like me some scary movies. But that doesn't mean I like all scary things. For example, I do not like German Shepherds. Or swarming insects. Or psychotically aggressive drivers. Or my children.

Now children have always been known as some of the scariest beings on the face of the planet. There is a real life reason why the horror genre is filled with them. According to movies, kids can see things adults can't see, hear things adults can't hear, they love making friends with dead things, and in the end, they're probably all going to kill their parents.

Now I'm gonna take a big step back and a little to the left for a second and acknowledge that when I suggested that I was afraid of my kids, you may have thought this was an adoption thing, or an attachment disorder thing. We've all heard the combination of true and fabricated stories where adopted children go on to, say, burn down their houses with family members still inside. Now I so definitely do not want to make light of what some families go through, Reactive Attachment Disorder can be a terrifying and painful thing. Its just not the scary thing in my house. RAD here looks like moments of faked affection followed by frequent lying, occasional tantrums, and the habitual hoarding of both rocks and trash. Which is not scary. It is annoying, but it is not scary.

No I'm not talking about adoption here, I'm talking about my biological kids, the ones who rip-tore their ways into this world from whence of my own bloodied and abused nethers. Henceforth and whereby.****

Point of this: when kids show up in this world, it is not a beautiful black and white Gaussian miracle scene from heaven like in those professionally done birth photos that keep popping up all over the internets. It is screaming and sweaty and bloody and naked and raw and sometimes there is poop. Exactly like a horror movie.

So maybe it shouldn't be surprising that after they show up, children continue to be terrifying. I have been a mom for 8 1/2 years, which means that waking up to the sound of blood curdling screams  or the sudden sight of a tiny human staring down at me while I sleep have been regular parts of my life for nearly a decade. Real life is far more like horror movies and far less like a sitcom than I had expected it to be. For example, in The Exorcist, when little Linda Blair peed herself, it was a sign that she was beginning to be possessed by the devil. Here, we change our pants and call that a Tuesday.

And just when the screaming and the peeing starts to slow down, naturally the children learn to interact with the ghost that is technology, and you get to open your computer to images like this:

But sometimes the kids push past the point of Acceptable Horror. A couple nights ago, we went to bed only to find that our 4 year old had secretly relocated himself from his bed into ours. Which has happened before, but I never love finding evidence that the little demon child is creeping into our room while we think he is safely sleeping.  So Shane picks him up and I walk ahead to turn on the kid's bedroom light. But just before I have a chance, the child opens his eyes, and hisses up at his father

"IIIII seeeee yoooooou..."
Then he laughed.

On an unrelated note:


*I'm not sure if this is true yet and it 100% hurts my feelings to say, but I think at some point I have to acknowledge that I'm not quite as spry and cool and youthful as I used to be so I dunno pushing-middle-aged sounds like it's cool because I'm probably going to live to like, infinity anyway, so middle age does not exist. Hashtag winning at logic.

*** There's this rumor somewhere that at some point, The Leprechaun goes to The Hood and that sounds really very special also, but sadly I haven't yet had the pleasure.

****If you thought I was going to write a horror post about children without mentioning how those little psychos blood-bathed their way into this world then you are crazy my friends. You are just crazy.
Posted by ~Ashley~ at May 05, 2018
Email ThisBlogThis!Share to TwitterShare to FacebookShare to Pinterest