The Theme was Spiders.

I'm pretty sure I shared some stuff about my son's birthday this year but if you missed it, the theme was Spiders. Not SpiderMan, mind you. Just Spiders. I mean, why not? Because apparently being 6 means being obsessed with things that other people find vile. And spiders have become The Thing for the six year old dude in this house.
Last Saturday morning, Little Dude walks up to me with a book he received at said birthday, and asks if I'll read him a story. But of course he doesn't mean story, because Little Dude is not actually a fan of fiction books*, it was in actuality a kids book on Spider Facts. Wait that sounds cool. That sounds like a thing, like: HASHTAG SPIDER FACTS! Sweet. Let's get that started.

Anyhoozit, we spend all morning reading about HASHTAG SPIDER FACTS and the concept is broached** that a person can own a spider as a pet, and that was the exact moment when my son's brain exploded. So I had him go ask his father because hashtag solid parenting (HASHTAG SPIDER FACTS) and his father said "maybe" which in father language means obviously yes except I don't want to do any work for this or discuss it more than we already have. There it was, he had his answer. A solid "maybe" out of both parents. Pushovers. This one was going to be a cinch.

Now, as the mother of 4 children, I consider it a very important part of life to turn everything into a Valuable Life Lesson. Also? I like to test my kids' resolve. Also? I like to put things off until probably they forget and then we don't have to do it. So I came up with a plan. And that plan was called, "If you want it, work for it, Sucker." Initially, this plan caused my son to cry large sad quiet tears, because after some time he realized that this plan also meant No Spider Today, and even No Spider Tomorrow and all of that was devastating to his tiny 6 year old spider loving spirit.

But he's still just six and so he rallied, and we worked out the details. At the time of The Deal, he had a net worth of 16 smackerinos. At that point in my life (so young, so naive) I had very little concept of the cost of a spider, so I told him he probably had to earn like, a hundred dollars. Now since then I have learned the actual cost of a spider is somewhere between $1000, if you want a spider that is brightly colored and exotic and ordered off the internet, or free, assuming you're willing to spider-hunt in the mountains for an old man tarantula looking for a date. None of this sounded great, considering Little Dude's budget and my personal distaste for creepy old men, so I decided to take a middle route, and drive him around to some local pet shops to price out their arachnids. 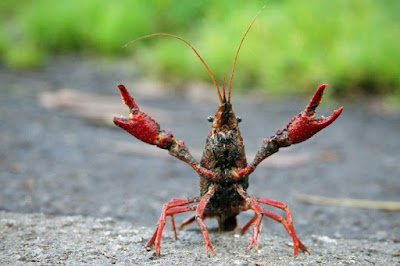 Fun fact: HASHTAG SPIDER FACT: if you go to a pet store and ask about a spider, they will tell you not to touch it. They will tell you that maybe it won't bite you but also MAYBE IT WILL BITE YOU and the bite will swell up all big and nasty like a Widow bite and that you'll probably die*** and then they will immediately try to convince you to buy a scorpion instead. Which, I'm sorry... WHAT? I mean, people are scared of spiders because, I guess, too many feet, too many eyes plus fangs, yeah? But good lord, look at the fracking death machine that is a scorpion. Once when I was taking a late night stroll with then-boyfriend-now-husband we walked up on a crawdaddy on the side walk with his claws extended up at us trying very hard to look like a badass scorpion ninja and that little fool almost caused me to give up on life and end it all. Point is: scorpions are terrifying. Crawdaddies are liars. And also, just don't buy a scorpion, you psychopath monster.

What we found in the end was that the cheapest local spider sellers will sell their spiders for the low low price of $25. And because I took pity on the child when the first dealer told us $100, I'd already promised to buy the terrarium. So there it was, he had his official deal: 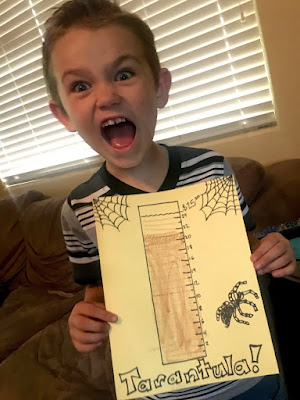 $16 net worth.
$9 left to earn.
$0.25 per chore (outside of normal stuff like make your bed and clean your room).
One Month to complete your mission.

And he was off.

See I'd calculated that he might do 2 chores a day, and earn about 3 bucks a week. I figured at that rate he could reach his goal in 3-4 weeks.

In fairness, in the mind of a 6 year old, getting a spider less than 2 weeks after you decided your whole world revolves around the idea of owning a spider isn't exactly instant gratification. He has used all of his free time to sweep floors and wash dishes and clean bathrooms. He has thought of nothing else for 10 straight days. He has yearned. He has suffered. He has set a goal before himself and he has worked toward that goal with laser focus. 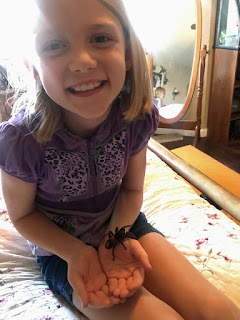 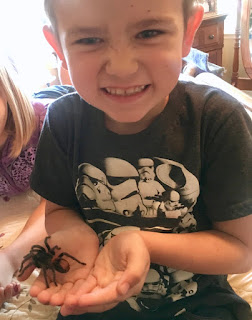 I'll be honest, it very helped that last Thursday, we got to visit the home of a friend of a friend who is the personal owner of 25 individual tarantulas along with a vast array of other small 4 legged friends. During this visit, Child Who Most Wanted a Spider and Child Who Least Wanted a Spider both decided to hold a spider. And oddly, lived to tell the tale. This spider is a Dwarf Chilean Fire something or other and God help me. I think this spider is adorable.

Side note: we have to talk more about this whole idea of kids and chores, because WOW that is one of those things that feels like an awesome idea until you try it and then lose your mind because not even Job had patience for this because in truth the kids are BANANAS bad at chores and then you die. But we'll get to that later.

For now, it is late. And apparently, I need to go prepare my house for spiders. So think about that while you drift off to sleep. Nighty night, creeped out friends!

*If you don't love fiction books, or at least if the idea of loving fiction books doesn't make you smile, then you haven't seen They Came Together. My heart hurts for you.
**Don't worry about it, doesn't matter how, doesn't matter why, doesn't matter which stupid mom said, "do you think you'd ever like to own a tarantula" and inceptioned the whole idea right into his mind. Sometimes you can just let it be.
***It's a lie. Clearer minded, more knowledgable humans will indicate that a tarantula bite feels roughly equivalent to a bee sting, which is A Bad Day, but not The Bad Day. We've all now adjusted our feelings to the possibility of a bee sting.
Posted by ~Ashley~ at June 11, 2018
Email ThisBlogThis!Share to TwitterShare to FacebookShare to Pinterest