Who's Getting Charged with Harassment NOW? 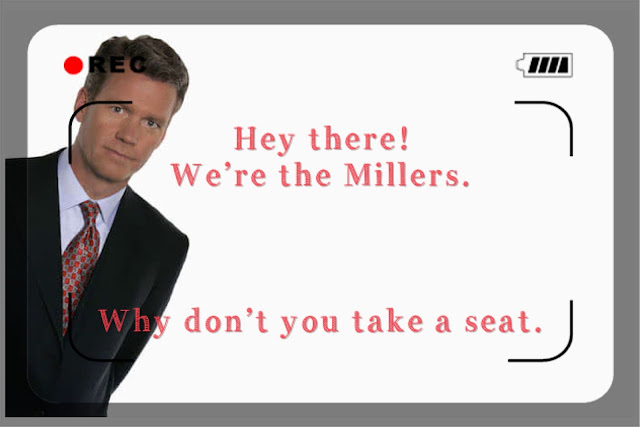 Today it seems, we accidentally tried to catch a predator.

After a very exciting Quantum Leap field trip this morning, we load up the minivan, lock everyone's seatbelts, start the car and at this exact moment "Mooooooooommmmyyyyyy. I REAWWY have to go potty!"

Well this makes sense. Since we were just standing in a lobby with an adjoining bathroom for 20 straight minutes. Since the bathroom was in full view the entire time. Since at no moment during that entire process did anyone let me know they needed to use the bathroom. It's only logical that you let us leave, let me put you in the car, let me lock everything down, start us up, and it's gotta be now, with a 50 yard trek across a busy parking lot with 4 kids and

"Are you serious? Are you actually saying that you are DEFINITELY GOING TO PEE YOUR PANTS RIGHT NOW if I don't get you all back outside and walk all the way across the parking lot just to beg the employees of this fine establishment to allow us to use their bathroom in this exact second?"*

He relented, most likely due to the crazy lady eye twitch that, if I do say so myself, I've really rather perfected over the last 8 years, and we drove off to our first errand. Which was at the Rite Aid. So we get in, and immediately beg the employees of THAT fine establishment to please allow us to use their restroom. And they said yes due to the fact that they are basically nice and humane individuals.

As we walk into the pre-bathroom section of the store, we bump into another person, a man, probably in his late 20s, also headed for the facilities. He stepped back to let us enter first, but then walked into the Men's bathroom, right after both my sons.

Obviously I have to pause here and say, yeah. Duh. Of course I had a moment right there. Of course I considered whether allowing my sons to use the Men's restroom while I stood outside the door and was thus separated from them for 2-3 minutes was safe. In this day and age I don't know how you could not. Now I examined the situation and felt it was safe enough and that I was close enough and while I totally respect if you would've made a different choice we'll just have to leave it at that. My boys ran straight to the Men's bathroom. And I didn't stop them.

So I'm having this moment of parental self-doubt and questioning, but it only lasts a moment because it was very shortly interrupted by a noise. Not just a noise. A high pitched scream, that then turned into the world's most uncomfortable laughter.

And just as quickly as the young gentleman had entered the room, he exited. Wide-eyed and petrified. "I uh, I'll just wait till they're done."

I know my boys. And in that moment, I knew exactly what had happened.

Ya see, that poor unsuspecting Not A Criminal walked into the Men's room, only to find the VERY naked behinds of two VERY young boys who had walked into the bathroom and immediately dropped trou, deciding to use the open-air urinals. This man walked in, and was magically transported into an episode of To Catch A Predator. These naked butts were his knocking on a door carrying pizza and wine coolers. But in an effort to not Go Directly to Jail**, our uncomfortable new friend ran away from my naked son's like someone had lit his not-a-pervert pants on fire.

So there it is. We've developed a sweet new sting operation. It's like entrapment but, but with less of the Catherine Zeta, and more of the tiny man butts that I shouldn't show you because I don't want to accidentally commit a crime and entrap myself.

Just the same. Watch out, potential Creep-Os and potential In the Wrong Place-Os. We're comin' for ya. Naked butts and all.

*Moms and lawyers. I tell ya. I can cross examine with the best of 'em.
**Do not pass Go. Do not collect $200.
Posted by ~Ashley~ at June 21, 2018
Email ThisBlogThis!Share to TwitterShare to FacebookShare to Pinterest