The Beginning of The End of Magic. Also Weapons.

How do you tell if your kid might be... dangerous? And to be clear I have no idea if I'm asking if this kid is gonna be a safety threat to all humans, or is just gonna know how to hold her own in a fight. Either way, as it turns out, Baby Girl don't play.

So to start with, backstory. Shane wrote another book. It's a middle-grade, coming of age story about a little girl in a world where pre-pubescent children have magic. Shane and I had a covert plan for this book. He wanted some honest prime-demo feedback, and luckily, he had a homeschool dork sample selection right under his own roof! So I read the book to the Weirdos, without spilling the beans that their dad had written it.

Anyway, so the kids in the story are able to choose their own items for their magical wands. We get some background on the lead's careful selection of the perfectly sized and shaped twig. The wands are beloved by these young magicians.

Later on, we find out another child has foregone the stick-wand, and instead infused his magic into a plastic toy light saber. This fact, as it turns out, was highly controversial in the Miller household.

And in case you're interested, The End of Magic is available for digital download on iBooks TOMORROW, June 28! In case the kids are looking for some summer reading fun with some strong pathos to boot, this book may be just the ticket! 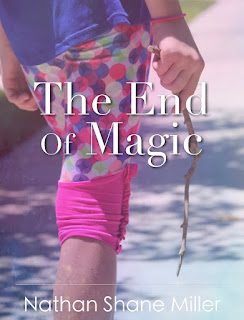 Posted by ~Ashley~ at June 27, 2019
Email ThisBlogThis!Share to TwitterShare to FacebookShare to Pinterest