Santa is a lie and everyone is covered in blood. 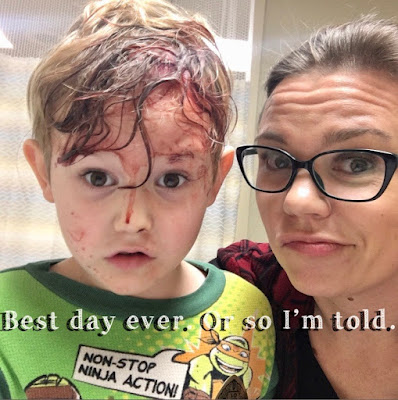 So yesterday was the kind of day that, well, brought me back here. Because I need to process. And because my baby child now smells like an uncooked turkey.

It started out with high hopes of baked cookies, letters to Santa, Christmas stories, and paper work, because of course, remaining gainfully employed always puts me right into the Christmas spirit.

But instead, it was real life. And real life, as it turns out, can have very little Christmas spirit in it at all.

So this year, the thing I've been anticipating and super dreading has happened. I have children now who have learned the TRUTH about SANTA.

And alright, not a huge shock. I mean, our eldest child turned 10 this year, and as it turns out, no one gets to keep Santa forever.

I'll get more into the Santa stuff, because it's a THING I assure you, but that, my friends, is for another day. Yesterday had a Santa incident, in that my eldest child experienced some more depression about the fact that no fat men are committing annual home invasions. And there was a running away incident and all of that was very long and terrible, and that still isn't the thing that I showed up here to tell you.

And that is because the night ended far, far weirder than that. There was praise team practice (you're preemptively welcome to everyone who gets to hear my loverly voice come Christmas morning), and there was grocery shopping, and all of it was going pretty much as expected till we got home and I put the kids down to bed.

I tucked them in. I said goodnights. I retreated to the living room to finish up the paperwork I hadn't finished, and


BANG!
I was off the couch and sprinting for the boys room fast enough to make Usain Bolt say Whoa man. That chick is fast.

But before I even opened the door, I could hear the screaming. This one was bad. 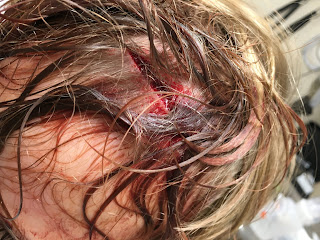 I flipped on the lights and saw my youngest child gripping his head in both hands and... wait... was that red? Was that real red or fear red?

Then he turned. And then he moved his hands. And... remember the elevator scene in The Shining? That.

FUN FACT: The 7 year old informed everyone later that at this point, MOMMY SAID A NAUGHTY WORD. Well obviously. I mean come on. YOU look at your 6-year-old child covered in blood and maintain your composure. Good fracking luck, I say. 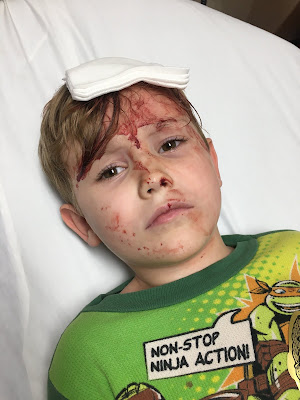 First thought at this point? I CAN'T. I can't handle this. My husband is still at work, 3 of my kids are in bed and 1 is ABSOLUTELY COVERD IN BLOOD and I simply cannot handle this. But as it turns out, sometimes "not handling this" is "not in the cards". So I calmed my behind down, grabbed the bloody child and rushed him to the bathroom. Which was a good idea. Because he was getting blood everywhere. And a bad idea. Because the bathroom, as it turns out, has a pretty sizable mirror.

WHAAAAT?!? SOOOO MUCH BLOOOOOD!!!!
IS THIS HOW THEY KILL PEOPLE????

As it turns out, my son had no chill about this. 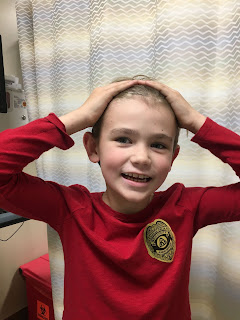 But as the life-saving, hero mother that I am, I didn't join in his screaming with an enthusiastic HOLY CRAP I KNOW, RIGHT?!? And instead, I got the kids up, had them get the gauze, had them get partially dressed, and loaded everyone in the car for a fun family Christmas outing to the emergency room. 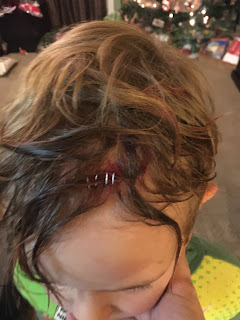 You learn something about people in a crisis. Personally, I learned that my eldest child screams and cries and never, ever, ever shuts up. And my #2, my mini momma, continues to be a mini momma, and tries to distract the sufferer by repeatedly crying out THINK ABOUT CHRISTMAS! THINK ABOUT CHRISTMAS! Kid 3, on the other hand, quietly talks about the horrible horrible. The amount of blood. And the falling. And the screaming. Later, he goes on to pull his hair straight back and asks his siblings if he looks more like Draco Malfoy or Legolas. Opinions varied. 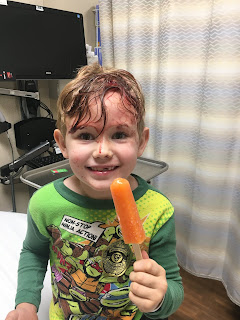 In the end, this weird kid loved this crazy weird day. They gave him a popscicle. He got to ride in a security truck. He called the hospital Free Popsicle Place. He told me that he thought this would be a really bad night, but it turned out to be the BEST night EVER! Then, he went on to ask me what MY favorite part of the night was.

God in heaven, help me.

Anyway, joking aside, Santa bought him this today. 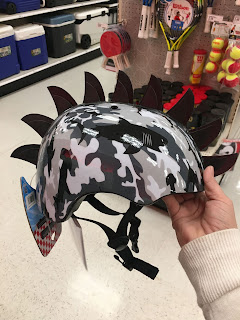 You're welcome Kid. Merry Christmas. Don't die.
Posted by ~Ashley~ at December 20, 2019
Email ThisBlogThis!Share to TwitterShare to FacebookShare to Pinterest